Lights in the darkness week 8

Lights in the darkness week 8

This past week was Laudato Si’ Week marking the fifth anniversary of Pope Francis’ world-famous letter read now by many people of all faiths and professions. The problems and challenges outlined in it can be overwhelming but Pope Francis ends the letter with the prayer: May our struggles and concern for this planet never take away the joy of our hope.
The Pandemic has many lessons to teach us – about the interconnection of all beings, the fragility of the balance in all systems, about the resilience and the generosity that lie at the heart of the human being. We MUST return, not to the ‘normal’ but create something new, regenerate NOT recover, our old models of economics, politics, development and employment. Our role can be to remind our politicians of their primary responsibility to 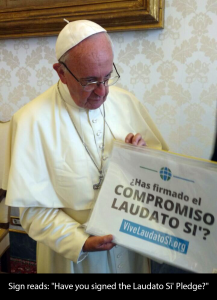 PROTECT their people and preserve their dignity. The underlying crisis is about the future of humanity!
It is my hope that this letter (Laudato Si’ Encyclical) can help us all to acknowledge the appeal, immensity and urgency of the challenge we face. LS 15 (LS = Laudato SI’; number indicates paragraph)
The climate is a common good, belonging to all and meant for all. LS 23 We need to strengthen the conviction that we are one single family.
We have come to see ourselves as earth’s lords and masters, entitled to plunder her at will. The violence present in our hearts is also reflected in the symptoms of sickness evident in the soil, in the water, in the air and in all forms of life. LS 2 Let us try to adjust our lenses so that we see, see the true reality rather than the reality we are lured into by a consumerist society.
Hear both the cry of the earth and the cry of the poor LS 49 There can be no social justice without earth justice. People in the poorest parts of the world are already feeling the impact of climate change even though they are contributing the least to its cause.
The external deserts in the world are growing because the internal deserts have become so vast. For this reason the ecological crisis is also a summons to profound interior conversion . . . ecological conversion . . . acknowledging that living our vocation to be protectors of God’s handiwork is essential . . . not an optional or secondary aspect of our spiritual experience. LS 217 Make a practice of reciting the Laudato Si’ Chaplet (See below)
There is a nobility in the duty to care for creation through little daily actions . . . These can be acts of love which express our own dignity. LS 211 Take the Laudato Si’ pledge as urged by Pope Francis on this the fifth anniversary of his letter to all people. (See below)
The entire material universe speaks of God’s love, his boundless affection for us. Soil, water, mountains: everything is, as it were, a caress of God. LS 84 Listen to ‘the voice of creation’ as part of your daily prayer of praise!

LIGHTS IN THE DARKNESS – Jim Cogley

Self-praise is no praise or is it?

Many of us grew up with that familiar saying often ringing in our ears: self-praise is no praise. So in response we learned to belittle ourselves and deny our true worth. Our gifts and talents we often hid or failed to develop in case people thought we had got too big for our boots. We faithfully recited the Creed, I believe in God, but failed miserably to believe in ourselves. We deflected compliments even though we desperately needed them. We thought that having low self-esteem was a form of virtue.
Yet our playing small served little purpose and left us with a sense of living a life that was so much less than the one we were called to live. To affirm our greatness as Children of God is to honour our creator, to deny it amounts to dishonor. It is not pride to believe in our dignity, to affirm our worth or to appreciate our gifts. To give ourselves credit for something is to give thanks to God for making it possible. There is a wonderful few verses from the Book of Sirach that is well worth taking to heart:
My Child, with humility, have self-esteem. Prize yourself as you deserve. Who can forgive the one who refuses to forgive himself, and who can lift up the person who puts himself down?
https://www.youtube.com/watch?v=qwusbrwppQc

There are very few of us who don’t have or haven’t had self-esteem issues. One of the consequences of suffering from low self-esteem is a loss of personal power. If my self-esteem is operating at sixty percent then forty percent of my power is not available to me, but where has it gone? It means that others and particularly some significant other will hold that power that is rightfully mine.
My inner void means that I am now dependent on their approval to feel validated for who I am. If he or she is smiling towards me I feel good but if they are a bit crunchy and having a bad hair day then I get out my comb. The fear of what others think becomes a limiting factor that prevents me from saying and doing what is true to myself. Aiming to please becomes the goal of my life and fear of failure prevents me from ever beginning. We make conscious choices as to how we are going to relate to another. Can we not also make a conscious choice as to how we are going to relate to ourselves, whether to be our own best friend or our own worst enemy? Only the person who is close to himself or herself is capable of being truly close to another.

Love as Freedom
Love is the Strongest Perfume

Many of us grew up believing that God was important and others were important but that we were not important. The resulting fallacy was that we were then trying to give something that we didn’t have ourselves. We even thought that having any form of self-love was to be selfish. In reality it was our lack of self-love that made us selfish and contributed to our emptiness. While we did our best to love others it was a love based on our need. This kind of love always comes with hooks attached. These we recognize in controlling behaviours when we expect another to conform to our expectations. It also is revealed in such remarks as: ‘After all I did for that child, now that she’s grown up, this is the way she treats me’.
Children spell love differently to us adults. For them it’s TIME. For adults it’s FREEDOM. The freedom that I experience in any adult relationship is the true measure of love. A man may be prepared to swear on the Bible as to how much he loves his wife. When asked if she feels loved the wife may smile and say, ‘certainly not. I just feel trapped by his neediness.’

To say to someone, ‘I need you because I love you’, is a very noble statement that while giving freedom it also acknowledges our need for interdependence and that it is through relationship that we grow and mature. On the other hand to say to someone, ‘I love you because I need you’, while it may sound right is actually a covert statement that you must be there to meet my needs, and yours will always come second.
This is the formula for a controlling relationship where there is little freedom, a need for subservience, and a tendency towards suspicion and distrust. Such a relationship places divine expectations on the other to always be there as an extension to one’s own private kingdom. It is where I make another to be the center of my life; they become my identity and I live through that person. The model of this relationship is of a clinging vine where the only answer for the one being clung to, if they are to survive, is to withdraw support. While this demands courage it is also a form of tough love because the other is in fact suppressing their own best qualities and needs to develop them.
https://www.youtube.com/watch?v=3X_xtgTe9t0 (A lovely song – Give Yourself to Love!)

Independence: This is where a couple may be married but live very separate lives; they are in fact married singles where there is little of common interest that binds them together.
Dependence: Where one party is needy and possessive they will have an inordinate need for the other to be close and always giving reassurance of their love. This will have the opposite effect to what is intended and the other will keep a distance since no one likes to suffocate in another’s need.
Co-Dependence: From the outside this looks like a lovely relationship where two people go everywhere and do everything together. Their life is each other and they have no life apart from the other. Like two birds tied together they have four wings but are unable to fly and so there is little real growth in this kind of relationship and if one is taken the other is often unable to survive.
Interdependence: This is where both parties value the relationship as a vehicle for their growth and development. Both are mature enough to stand on their own two feet. In a spirit of freedom they come together and yet support each other on their individual paths. This is a relationship of equality and mutual respect.

It’s never the water in the ocean that sinks our boat
But what we let on board.

Among Jesus’ parting words to his disciples before his Ascension were; Do not let your hearts be troubled or afraid. Peace is my gift to you. The big question is just how do we keep our hearts from being troubled in troubled times. For the last few months of her life my mother who was 84 went into a nursing home. There she fell madly in love with an old seaman of her own age. It was a lovely relationship with lots in common and I remained friends with this man after my mother’s passing that had left him heartbroken.
In his earlier life he had crossed the Atlantic on a regular basis during WWII. Each voyage was perilous, submarines were always looking for targets and they usually traveled in convoys with destroyer escort.
He told me one story from 1942 when his ship was again on an Atlantic crossing. The war was at its height and they were carrying huge Sherman tanks each weighing twenty or thirty tons. In the middle of a big storm several of these monsters broke loose. As the ship would roll and toss these would slide from bulkhead to bulkhead just shaking the ship apart. They had to pull out of the convoy and head into the sea while the seamen went below to try and secure the tanks. Finally after riding them like cowboys and trying to hook on cables they eventually got the tanks lashed down. What he learned from that incident was that the real danger to the ship came not from the storm on the outside or even the submarines but from the disturbance on the inside. To handle what is happening externally in our lives we need to be battered down from within. That means really taking control of our thoughts because they can sink us faster than any Corona Virus.